A NOTE ON A GLASGOW WORTHY by HORACE LEAF 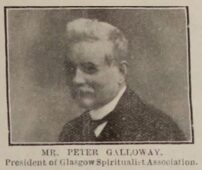 Mr. Peter Galloway’s popularity among Glasgow Spiritualists is unsurpassed. To know him is to like him. There is something about his personality indescribably friendly and cheerful, inspiring confidence. Forty five years of business life in a great city have not sufficed to eliminate the air of the countryman about him. This is probably owing to his being a member of a family which has for many generations lived on the land. It was in Alwyth, Perthshire, in 1853, that he first made his entry into this world, and for many years his rather followed agricultural pursuits.

How seriously Mr. Galloway took his religion is revealed by the important services he rendered the various churches to which no belonged. For seventeen years he was an elder in one of them;  while for twenty-five years he was a Sunday school teacher. In course of time he occupied every position open to laymen in the United Free Church of Scotland; and in addition conducted one of the largest Bands of Hope in Glasgow. Indeed, for more than a quarter of a century he voluntarily identified himself in his religious work with the young life of the City of Glasgow. One church is actually indebted to him for its continued existence, as, but for his efforts in raising funds for it, extinction would have been its inevitable fate.

In all probability Mr. Galloway would have continued his good offices in the Church but for a terrible tragedy which befell him twelve years ago. In the autumn of 1909 two of his sons, twins, embarked as passengers on the S.S. “Hestia,” taking with them, for their brother’s farming in America, six fine pedigree Clydesdale horses. The ill-fated vessel struck a rock between St. John’s, Newfoundland, and New York, and the two boys were drowned.

Now came the supreme trial of his religious faith. Could it support him confidently through the agony of his terrible calamity ? “I had been brought up to believe that God did everything right,” said Mr. Galloway, “but I could not understand how He could give me my fatherly love for my children and then snatch them so suddenly and ruthlessly away.”

One day, when in the very depths of despair, there came into his place of business a man whom he had long regarded as a fool because of his belief in Spiritualism. “Mr. Galloway,” said he, “I am deeply sorry for you in your loss. Can Spiritualism do nothing to help you ?”

“My feelings,” replied Mr. Galloway half angrily, “are too sacred for you to banter with.”
“I would not do that,” said the Spiritualist. “I want to tell you that the night after your boys were drowned they came to a séance and brought a message for you.”

Mr. Galloway was incredulous. “Why,” said he, “how could that be when no one in Great Britain could have known of the shipwreck so soon?” Nevertheless, it proved to be the fact. The spirits of his two sons, he discovered, had actually gone to a medium previously totally unknown to him and to them, and had given a message for their father, accompanied with absolutely satisfactory evidence of their identity, which, except for supernormal means, could not possibly have been known to anyone present on the occasion!

Here at last was hope. A gleam had come through the apparently impenetrable darkness; his sons were living, although “dead,” and, according to their message, all was well with them and their father should try not to fret !

“After that,” Mr. Galloway ” told me, “I attended Spiritualist meetings, and eventually got in touch with a remarkably fine medium, with the result that I finally became convinced of the reality of survival. My boys, I got to know, were only in the Beyond.”

Few people have been more fortunate than Mr. Galloway in witnessing high-class psychic phenomena; nor can many have had more evidence of survival. I have myself been present with him at various seances when conclusive evidence of spirit intercourse has been obtained, and these have constituted only a tithe of the evidence he has been privileged to witness. Nor has anyone that I know more stories to recount, showing how marvellous are some of the results and proofs obtained through mediumistic channels.

It is not too much to say that, if after his unique experiences, Mr. Galloway, so eminently well-balanced and sane in his outlook, were not convinced of the truth of Spiritualism, then it is practically impossible to conceive what would constitute proof. Mr. Galloway almost immediately identified himself with the Spiritualist movement, and found it _ in a very bad state. The Glasgow Association of Spiritualists, then about thirty years old, was conducting its meetings in a room capable of holding only about forty people. Something, he felt, ought to be done to alter such a state of affairs. The change came when the late Mr. James Robertson consented to become president, Mr. Galloway promising to give him all the support he could.

The history of the Association has since become one of the most interesting in the story of Modern Spiritualism. From an insignificant struggling society, torn by internal dissensions, it has literally sprung to the front rank among Spiritualist organisations. Much of this, declares Mr. Galloway, is owing to the sterling work of Mr. James Robertson; but much, too, is owing to Mr. Galloway and the forward policy he has advocated. Nothing can testify to his merits more than the phenomenal growth of the Glasgow Association during the four years that he has been its President. It is to-day the largest and probably the most influential Spiritualist society in Great Britain. For organisation and progress it is unsurpassed. It has compelled Glasgow to respect Spiritualism, and bids fair to do the same throughout Scotland.

Its activities are numerous; its results excellent. Every Sunday evening from six hundred to twelve hundred people gather in its spacious hall to listen to the best platform talent procurable. Another important feature of its work is the immense “open circle” held under its auspices every Sunday afternoon. About three hundred people, many of them Church members, who come straight from their pews, meet to witness and encourage spirit control and messages through whoever the unseen entities may select from among the audience for the purpose. In this way valuable spontaneous phenomena have been obtained and new mediums discovered. The fact that this has been going on regularly for several years testifies to the high quality of the results and the wisdom of the methods adopted by Mr. Galloway and his fellow officials.